Don’t Miss Part 1 of this blog: Could COVID-19 Lead the Way to a Self-Service Revolution?

Be sure to check out part 1 here!

I recall having a conversation with Jay Price, at the time the University of Tennessee, Knoxville’s recycling manager, and who now oversees all sustainability initiatives. It was following a session about mini-bin deskside programs at the 2015 AASHE conference in Minneapolis, and Jay was actively focused on how to bring such a program to his campus. Flash forward to July 2020, the 30,000 FTE university has converted nearly 90% of campus to the My Tiny Trash system, which provides each staff and faculty workstation with a blue 28 qt. recycling bin and a smaller .75 gallon hanging trash basket. In a change from the previous deskside waste system, custodians no longer empty either bin, instead relying on people to empty them into centralized bins themselves. Hard data isn’t available campus-wide, but in pilot locations, they experienced recycling rates of 50% and even 65% versus an average in the low 30%’s for most campus buildings.

Tennessee’s experience is noteworthy not just for its success, but also for how the implementation has played out. When Jay first proposed the new system, custodial managers were skeptical about the idea. By this past spring when the COVID-19 pandemic shut down the sustainability office’s rollout campaign, the school was 66% converted. According to the current Recycling Supervisor, Khann Chov, with sustainability staff forced to work from home, it was the same custodial managers who stepped in to roll out the new system at the remaining office locations. They had seen the labor savings first hand, and a new initiative of their own, “T-Cleaning” required all free hands to focus on deep cleaning campus buildings. 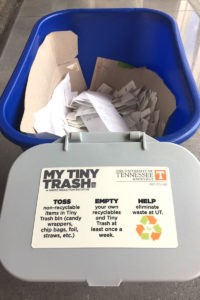 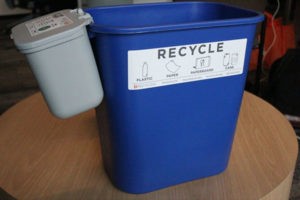 COVID-19 has forced a chaotic scramble for colleges and universities to figure out how to return students to campus safely. As I shared in my previous blog, this turmoil is creating a significant opportunity for recycling and sustainability managers to push waste collection away from the highly decentralized network of waste bins and corresponding collection labor toward a “self-service recycling” model based on fewer, higher-volume centralized bins. I’ll talk more about the waste reduction benefits in a series of future blogs that look closer into specific manifestations of this model.

While the University of Tennessee had begun the shift toward centralized office waste collection before COVID-19, for many schools the potential benefit to recycling is not a strong enough argument, by itself, to overcome the natural resistance to change. In my conversations with recycling and zero waste managers across the country, however, I’m learning that pressure to refocus housekeeping labor inside buildings is only one of the pandemic-related factors that are creating an opening to advance this model.

Grounds crews may not be as focused on cleaning, but COVID is forcing changes to their routines as well. Like other schools, UMass Dartmouth has had to furlough facilities employees go in the face of looming budget cuts. But the grass doesn’t stop growing and trees don’t prune themselves. With fewer grounds crew left to maintain the appearance of the campus, Jamie Jacquart, Assistant Director of Campus Sustainability, had a shovel-ready solution to reduce their workload. For several years he’s been working to reorganize the ad hoc collection of outdoor trash bins placed around campus. The main objective was to add recycling next to every trash bin, but that can be expensive to do across an entire campus even in flush times. Noticing there were more trash bins than necessary, Jacquart realized he could achieve his trash/recycling parity goal at less cost simply by eliminating redundant trash bins that generated low volumes of waste. His new plan was to remove bins from pathways and focus them near building entrances. Despite resistance from the Grounds department responsible for servicing the bins, he’d successfully pushed a phase 1 that removed a number of old trash bins from pathways in favor of 20 new dual trash and recycling units. As the COVID-forced staff cutbacks hit in the spring, Jacquart found the grounds manager much more receptive to expanding the new arrangement to other parts of campus. With this new round of consolidations completed, the school has reduced the number of bin locations, from 119 to 80. “This has been an opportunity to intentionally create a campus-wide collection system rather than follow a variety of solutions created over the past 50 years that deal with much smaller scopes.”

Avoiding touchpoints is another significant driver. Schools as varied as Denison University in Ohio, University of Connecticut and University of Alabama, Birmingham are no longer sending custodians into private offices for any type of service, in part to reduce the potential for cross-contamination. For the same reasons, the University of California, Los Angeles (UCLA) initially reacted by having custodians collect wastebaskets set outside the office and classroom doors. According to the school’s Zero Waste Coordinator, Kikei Wong, however, Facilities Management committed over the summer to roll out a new system of standardized 3-bin (recycling | organics| trash) stations placed in hallways and other centralized locations. The move includes eliminating all deskside services. The university had announced similar plans several years ago, encountering pushback early on forced it to scale back to a pilot project. Wong credits the upheaval from COVID with resurrecting the initiative and putting it on a fast track to be campus-wide by the end of the year. “With so many people working and studying remotely, we had the opportunity to reevaluate our waste collection systems and establish more efficient and sustainable campus standards”.

Rebellion from staff and faculty, of course, is a major barrier for many schools. As Paddy Watson points out, though, another silver lining of the pandemic is that most aren’t around to generate waste. Like many schools, Towson University, is only returning a small percentage of students and staff for in-person classes this fall. Watson, who is the school’s Assistant Director of Sustainability, notes that Public health concerns associated with COVID might provide a defensible justification to those who would object to emptying their own waste bins. Equally important is that it will provide breathing space for the school’s upcoming conversion to deskside self-service to become established “facts on the ground” by the time most staff and faculty return to campus. Like UCLA, Towson had previously piloted the removal of bins from classrooms and the elimination of deskside service. But Watson says the pandemic has put wind in the sails to expand these and pursue other waste reduction changes including expanded organics collection sites and realizing the cost savings potential of reusables. “A year ago, I don’t think anybody realized how quickly and efficiently a university could pivot its entire operations. With all procedures under review, now is the time to assess the feasibility of implementing what was previously deemed impossible.”

Two other observations came up repeatedly in my conversations. Yes, COVID provides a reasonable justification and breathing room to implement changes. But given the massive personal and institutional upheaval of the last six months, people have become conditioned to change. In the grand scheme of things, walking ten feet to toss an empty bottle seems like a pretty minor issue.

Lastly, the summer and launch of the school year have been incredibly hectic for recycling and facility managers as they’ve scrambled to adjust operations to constantly shifting re-opening plans. But with the school year underway, many are experiencing a rare phenomenon: free time! With fewer people on campus to educate or collect waste from, a number of the people I spoke with said they anticipate having more time to invest in long term planning for initiatives like centralized collection arrangements.

I’ll end this blog with an observation that was shared with me. I made the point in pt 1 of this series that one of the biggest barriers on the path to zero waste has been getting campus planners to perceive waste reduction programs, including recycling, as more than just “nice but not essential”. One of the people I spoke with mused about changing their title from “Zero Waste Manager” to “Waste Systems Manager”. Though “zero waste” remains an effective term to rally the broader campus community toward a common goal, it fell flat with a key audience: the engineers and operational folks they work with within the facilities department. The person, who asked I withhold their name because of campus policy, said the term came across as a feel-good slogan. Over the last 50 years, building operations like energy management have been revolutionized by metrics and a push toward more efficient, cost-effective “systems”. It’s now common in a facilities dept. to see titles like “energy systems manager” or “water systems manager”, because they underline the professional sophistication involved.
Self-service / centralized bin arrangements are exhibit A in how we can manage waste with greater sophistication. COVID has provided a golden opportunity to bring solutions to the table that meet the immediate needs of the moment, and demonstrate to campus decision-makers how waste collection, too, is a system that can be refined and improved.

The College & University Recycling Coalition (CURC) and US Composting Council (USCC) recently conducted a survey of how campus recycling and composting programs were adjusting to COVID for the start of the fall survey. You can view the results of this survey on CURC’s website.

Separately, Busch Systems is partnering with CURC, USCC and other organizations to survey the long term impacts of COVID to campus waste reduction programs. We encourage all US and Canadian colleges and universities to participate in this part 2 survey (17 questions, takes 10 minutes or less). The deadline to participate is November 6. 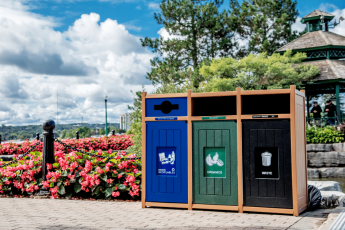 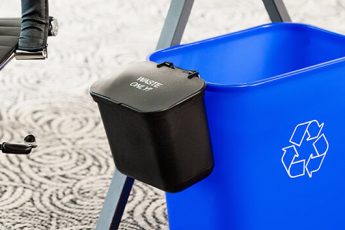 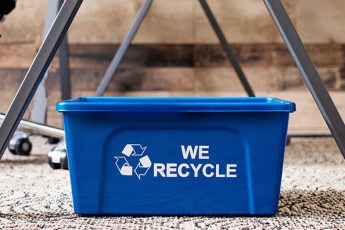 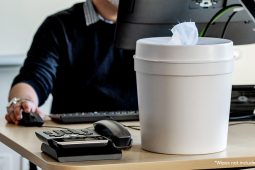 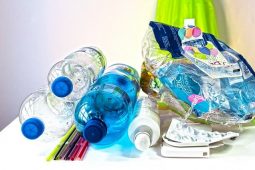 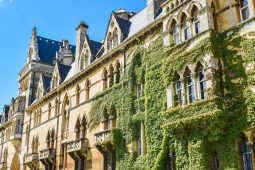 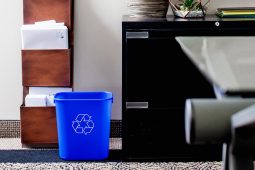 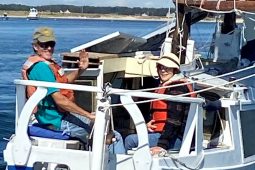 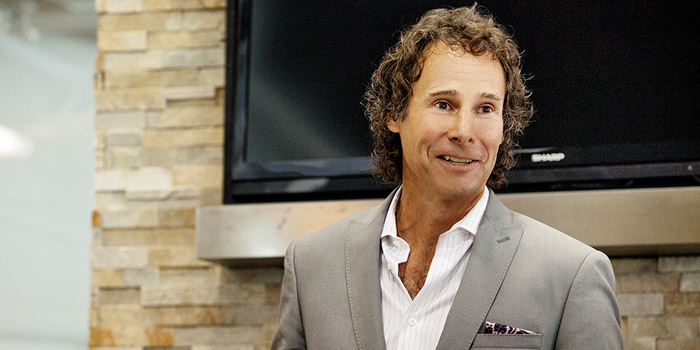 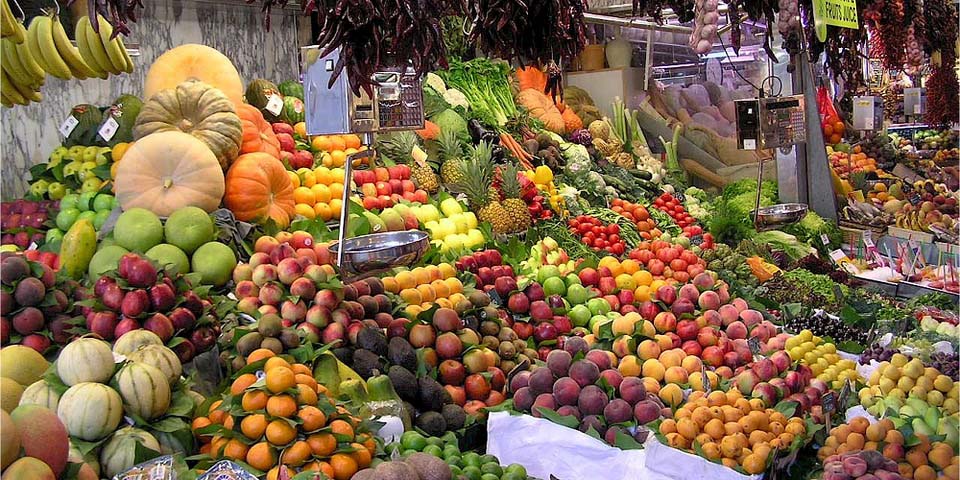 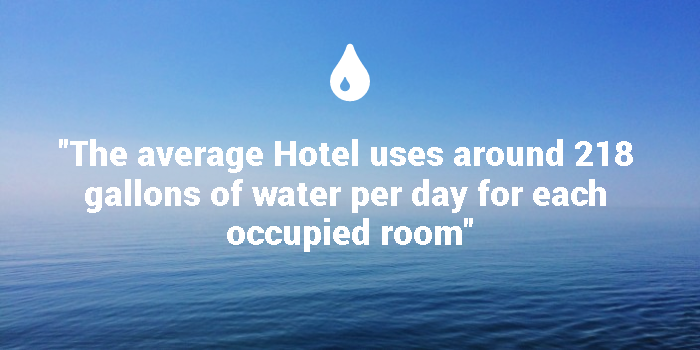 How to Be A Water Conservation Juggernaut At Home 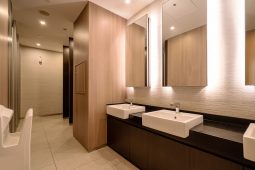 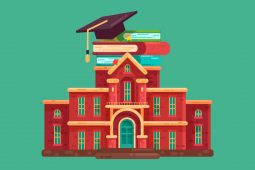