Your browser does not support JavaScript! When Soil Becomes Dirt | RC 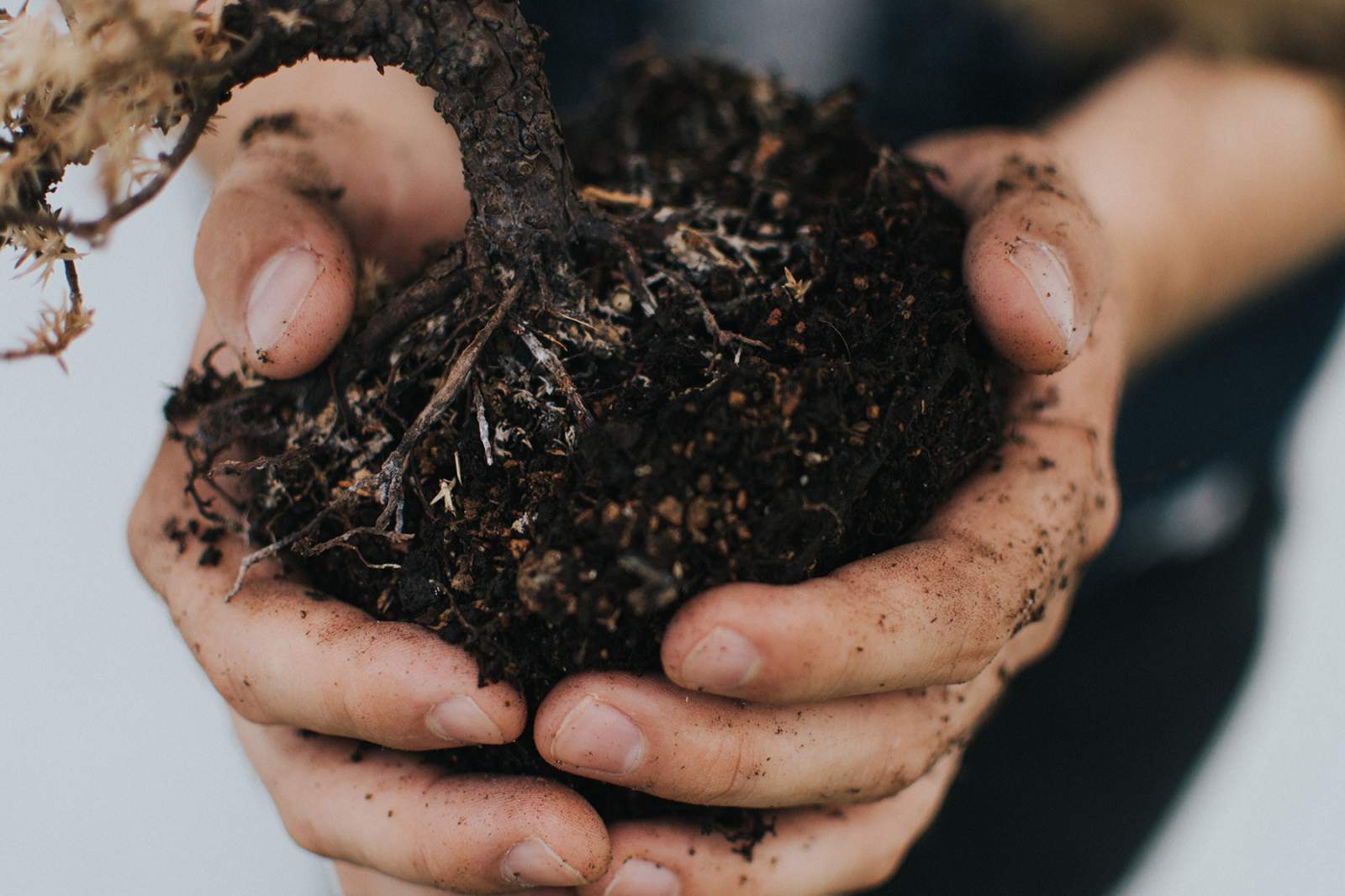 The book was written not long after my dad passed away and the beloved farm where I grew up was sold. The quote has always resonated with me because it brings back beautiful memories of how much my dad valued healthy soil. My dad used to reach down often, pick up a handful of soil, carefully examine it and then watch that rich, moist, healthy earth flow between his fingers. It would be full of organic matter which was teaming with beneficial organisms. The website Planeta mentions that "In a handful of fertile soil there are more individual organisms than the total number of human beings that have ever existed." Oxford dictionary defines soil as "The upper layer of earth in which plants grow, a black or dark brown material typically consisting of a mixture of organic remains, clay, and rock particles." It was my dad's dream that I would one day take over the family farm. And if I were to take over it, the soil was going to be in the finest condition possible.

My dad farmed the land with what is known as organic fertilizers. A publication in peer-reviewed Research Gate describes organic fertilizers as "derived from living or once-living material, including animal waste, crop residues, compost and numerous other by-products of living organisms." The amazing thing with this form of fertilizer is that it has been used for hundreds if not thousands of years to increase the yield or condition of agricultural, garden and ornamental plants. If organic methods were used, soils were sustainable. The degradation was very minimal. You gave back to the soil what you took out of it. The organic matter in soils used in organic farming can benefit soil drainage, aeration, water holding capacity, and the ability of the soil to retain nutrients. The land can sustainably be farmed indefinitely.

Research Gate describes inorganic (synthetic) fertilizers as "derived from non-living sources and include most of our man-made, petroleum fertilizers and commercial fertilizers." Synthetic fertilizers are banned from the United States Department of Agriculture (USDA) organic production standards but are being used in conventional food production on a massive scale. Both man-made synthetic fertilizers and natural organic fertilizers contain the same elements. So why was my dad so adamant about farming traditionally? There are three things I recollect way back from several decades ago. I call to mind the quality of our foods produced using traditional methods. Then there was the impact on the environment. Lastly, there was what my dad often referred to as "giving back to the land," which is what I would describe as the sustainability of our food system.

The Quality Of Our Foods

On our farm, much of the food we produced we sold locally. My dad was very conscientious and desired the highest quality of food not only for his own family but also for everyone who came by and bought off us. Back in the 1970s, there weren't organic food sections in the local supermarket like we have today. And consumers had no idea how the food was grown when they went grocery shopping. We grew 15 acres of potatoes on our farm. People drove for miles to buy potatoes from us. They said our potatoes tasted so much better than store bought. There could be a lot of truth to that. A study published by the British School of Nutrition looked at an unprecedented 343 peer-reviewed publications comparing the nutritional quality and safety of organic and conventional plant-based foods, including fruits, vegetables, and grains. A few of the findings are that organically grown food contains 50% more vitamins, minerals, and nutrients over food grown conventionally. They include a concentration of 18 to 69 percent higher levels of antioxidants. Mary Beth Albright of National Geographic mentions these higher antioxidants in organic food become the equivalent of approximately two extra produce portions every day, without altering food intake. The British School of Nutrition paper shows that "higher antioxidant levels enhance food's organoleptic qualities." What does that mean? It means the human senses of taste, aroma, and mouthfeel are all more intense in organically grown food.

The Impact On The Environment

Through crop rotation and growing cover crops, organic farming methods return to the soil much of what was taken out. Chemical nitrogen fertilizer is known for burning up the organic material in soils (with organic material gone, excess rain runoff increases, and more irrigation is required.) How much has been lost? The non-profit organization Grain states “the world’s soil has lost 150,000 to 205,000 million tons of organic matter. This has resulted in 220,000 to 330,000 million tons of carbon monoxide emitted into the air. This translates to 30% of the excess carbon monoxide in the atmosphere.” Environmentally, excess rainfall and irrigation water runoff also carry excess nitrogen runoff from chemical fertilizers. This has been known to pollute drinking water supplies. The U.S. Department of Agriculture (USDA) estimates that removing nitrate from U.S. drinking water systems costs nearly $5 billion a year, which the industrial agriculture industry has been largely shielded from. The natural health newsletter Mecola has stated that "nitrates in water have been linked to cancer and birth defects.”

The Sustainability Of Our Food System

Can industrial agriculture using modern farming methods sustain itself? According to Professor John Crawford of the University of Sydney, the answer is no. Professor Crawford wrote an article for Time magazine titled What if the World's Soil Runs Out and estimates we have around "Sixty years of topsoil left using conventional farming methods. Forty percent of agricultural soil is currently either degraded or seriously degraded. Between fifty and seventy percent of the world’s topsoil is gone.” Professor Crawford continues that if “Industrial farming continues under a business as usual scenario; this degraded soil will mean that the world will produce 30% less food over the next 20-50 years.”

The eighty-acre field behind my property drops three inches at the point where crops are grown. On the other side of the field, the land rises three inches where it meets some environmentally protected land. How did this happen? More fertility was stripped out of the soil than what was given back. We have been living in the same residence for the past 28 years, and each year crops are grown using the same conventional farming methods. Farming this way, the soil is becoming degraded. Walking a few paces out into the field, I will pick up a handful of this earth, like my dad used to do. This degraded soil is losing its texture and organic matter. It doesn't even have that earthy smell. Soil full of microorganisms is living material. When this life is taken all away, it merely becomes dirt.

It is important to try and think of soil as a bank account. Whenever we grow and harvest a crop, we take something out of the account. Just like money, we cannot keep farming conventionally and keep withdrawing from our soils for too long before our soil fertility account runs dry. So, how do we keep that "bank account" from running out? The first is to buy organic. It is healthier, tastes better, and you know that your food is produced with sustainable practices. Our world operates on supply and demand. The more consumers demand organically produced food, the more farmers will switch to growing organically to supply that demand. It will take decades to regenerate degraded soil, but it must start somewhere.

The second is to reduce food waste and compost what food waste we have. CBC News has an article on food waste and quotes the Food and Agriculture Organization of the United Nations that “Food waste is a global problem where 1.3 billion tonnes of food gets thrown out each year”. Between stores, restaurants and at home, this adds up to a tonne of food thrown out each year for every six people on earth. Instead of ending up in a landfill, food waste that is composted can boost the organic levels of soils on farms, local gardens and vegetable patches.