Your browser does not support JavaScript! Old Growth Forests | RC 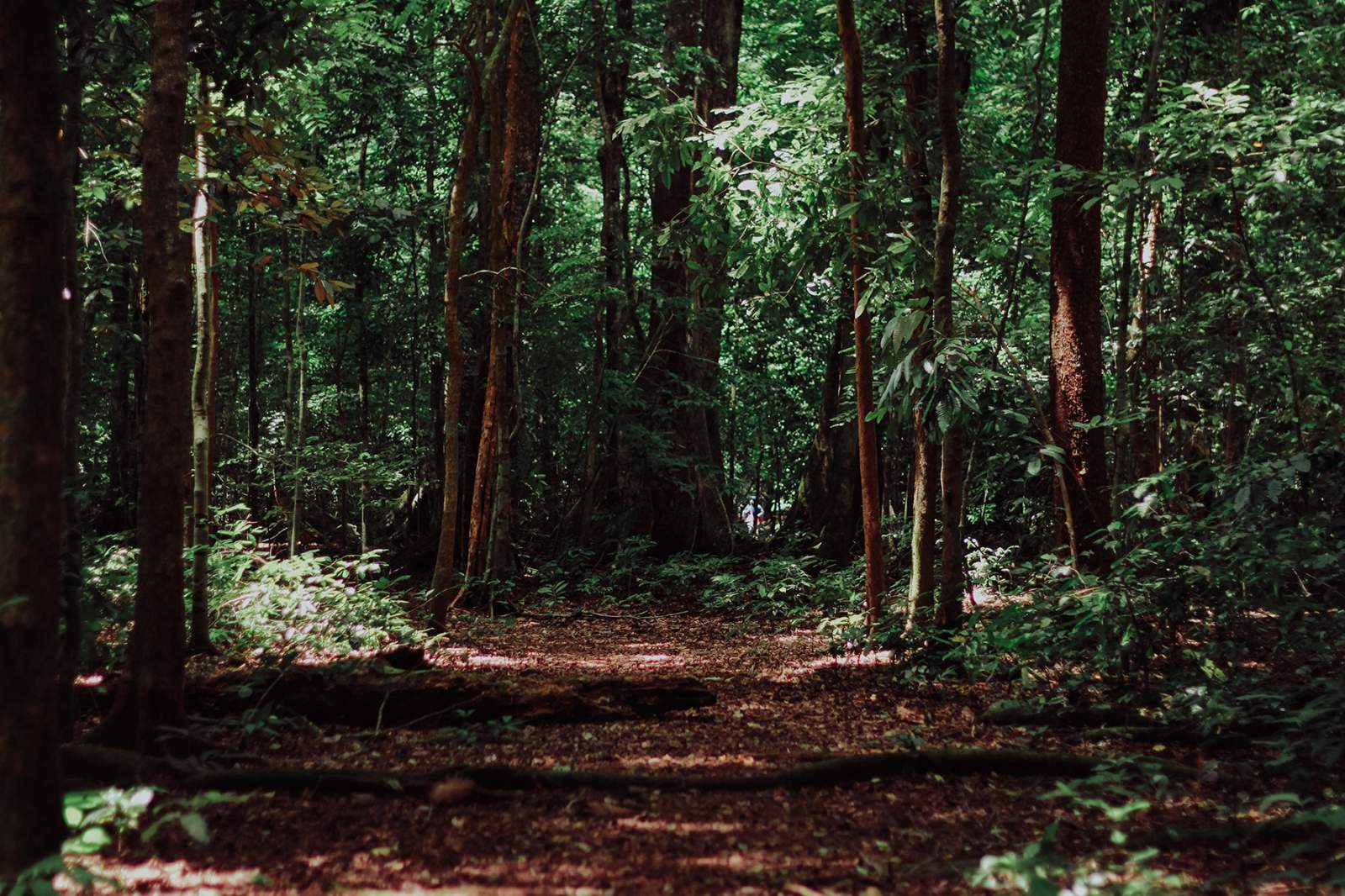 Most Ontario ultrarunners would say that the 56k Limberlost Challenge is one of the toughest and most scenic footraces in the province of Ontario. It is held in the Limberlost Forest and Wildlife Reserve near Algonquin Park. Established in 1893, Algonquin Park is the oldest provincial park in Ontario.

I am now 60 years old, and I know I will never be a medal contender in these races. I run these races for the challenge, as an incentive to keep myself fit, to connect with other ultrarunners, and to run in some of the most beautiful places on earth. On July 7th, 2018, I ran this race. The race consists of four fourteen-kilometer loops on a private reserve. It was such a privilege to run in this magnificent reserve and to do it on my 60th birthday.

I ran with four runners for different intervals of the course. We ran varying distances together – anywhere from two to eight kilometers. I always love connecting with other runners and hearing about their running journey and what they do for a living. One of those runners just happened to be an environmental scientist, and for the five or six kilometers I ran with him I was mesmerized and in awe of his depth of knowledge of old growth forests. This was his specialty. And this was the very type of forest we were running through at the Limberlost Forest and Wildlife Reserve. Those forty minutes of running with this young ultrarunner gave me a heightened awareness and appreciation for old growth forests.

So, what is an old growth forest? This has been a question that has always baffled me. Is there a concrete definition? Would I recognize an old growth forest if I were hiking or running through one? The one thing I noticed immediately about this old growth Limberlost Forest on this bright, sunny day, was that in the deep forest arrayed with magnificent cathedral hemlocks, it was harder to see the trail. I don't think I have ever been in a forest this dense in Southern Ontario.

Landowner Resource Centre (LRC) mentions that most of Southern Ontario's old growth forests were destroyed by logging, forest fires, and settlement between the mid-1700s and the early 1900s. Loggers took the best pines and oaks to supply the European market. Settlers also burned the forests to clear the land or to make potash. Then they pulled out the stumps and cultivated the soil, removing the last traces of the pre-settlement.

Many ultrarunners who have run this course are baffled why this course takes its toll on even the most highly experienced runners. Some racecourses in Ontario have greater elevation change. Other races are more in the open where runners face the intense heat of the sun. This course might follow the edge of a lake for a few minutes in the sunlight, and then detour back into the deep, dense forest. Roots and rocks abound here on the trail and require the nimblest of footwork. And with eyes not fully adjusted to the light change, many runners were going down. Others were smashing their feet on the rocks. Blackened toenails are very common with runners on this course.

Although there is no concrete definition of an old growth forest, there are many things my new environmental scientist ultrarunner friend pointed out that are worth noting. There were the various stages of growth of the forest as part of a complex multi-layered structure, with trees of all ages and sizes. They included super-canopy trees, these massive trees poke above the canopy, providing nesting sites and resting places for birds. These trees die of old age instead of by a chainsaw, and then these fallen giants decay and the circle of life continues. The canopy trees filter out the sunlight, making it dimmer in the forest even on a sunny day. My environmentalist friend mentioned that an old growth forest in south/central Ontario will not have seen any form of tree harvesting in at least 140 years. He estimated 140 to 200 years ago to be the last time that the Limberlost Forest and Wildlife Preserve was logged, which dates to the original colonists.

Beneath the canopy trees are the understorey trees. Some are surprisingly old, but with lack of sunlight, their growth rate is limited. And carpeting the forest floor are tree seedlings, ferns, shrubs, lichens, flowers, mosses, and fungi. Along the forest floor are the organic litter, primarily consisting of leaves, dead wood, and small branches all decomposing and enriching the soil with nutrients and providing habitat for many life forms. This layer also acts like a sponge to help retain moisture in the soil. Throughout the forest, there were both living and dead cavity trees. These trees with holes that mammals and birds could use for nesting or denning, feeding or escaping, were evident throughout the forest. To top it all off, there were snags, referred to as standing dead trees. Snags provide habitat to bats, raccoons, tree swallows, warblers, flycatchers, owls, woodpeckers, and other species. It was so invigorating and restorative to run through this spectacular forest and listen to the symphony of birdsong. Songbirds are attracted to old growth forests. Many species considered rare or endangered make their home in these forests and depend on the features found there for survival.

Another sign of an old growth forest is the type of vegetation growing there. My environmental scientist ultrarunner friend pointed out the Eastern Hemlock. These trees are deceiving, as I learned they are much older than I realized. Trees under 80 centimeters are commonly over 300 years old. Eastern Hemlock is often found in areas that have been continuously forested before European settlement hundreds of years ago. The Eastern Hemlock does not recover well after disturbance. If aggressive forestry takes place in an Eastern Hemlock forest, this tree requiring cool, shaded protection to re-establish does not return. In the Limberlost Forest and Wildlife Preserve, the Eastern Hemlock was thriving. Some of these trees had tiny holes left by the yellow-bellied sapsucker, a bird I have never seen in the "newer" logged forests around where I live. The Eastern Hemlock is also the only host of the Hemlock Varnish Fungus, which grows prolifically on dead and dying hemlocks in this forest. Also known as the Hemlock Reishi, the mushroom has medicinal value. It is the most beautiful fungi I have ever seen.

I have so much respect and admiration for the owners of this private preserve. They have chosen not to have it logged, even selectively. Old growth forests are far more diverse in structure and composition than your typical forest. And the owner has allowed trail runners like me to enjoy it, and marvel in its breathtaking beauty, in what the majority of ultrarunners describe as the most spectacular race course in Ontario. I was so privileged to run this 56k ultramarathon through one of the very few remaining privately owned old-growth forests in south/central Ontario.

Can we take our current logged out forests and replicate them to become more like a pre-settlement forest with all its ecological diversity? It can be done but does not happen overnight. It takes massive amounts of time. Restoring old-growth forests on land cleared for agriculture could take several hundred years or more. Existing forests that have been logged can achieve old-growth features more quickly. The easiest way to do it is to leave the forest alone and allow nature to heal itself. This is what likely has happened at the Limberlost Forest and Wildlife Preserve. In the last 140 plus years, it has become more like the wild, damp and shaggy place it once was. As trees declined and died, they became precious nesting and denning sites for birds and mammals, some species being rare and endangered. Deadwood, decomposing on the forest floor, created habitat for many of the less visible species in the forest and provided energy and nutrients to support new life. Eventually, the species composition became more like that of the pre-settlement forest.