Your browser does not support JavaScript! Environmental Impact of a Fake Christmas Tree | RC 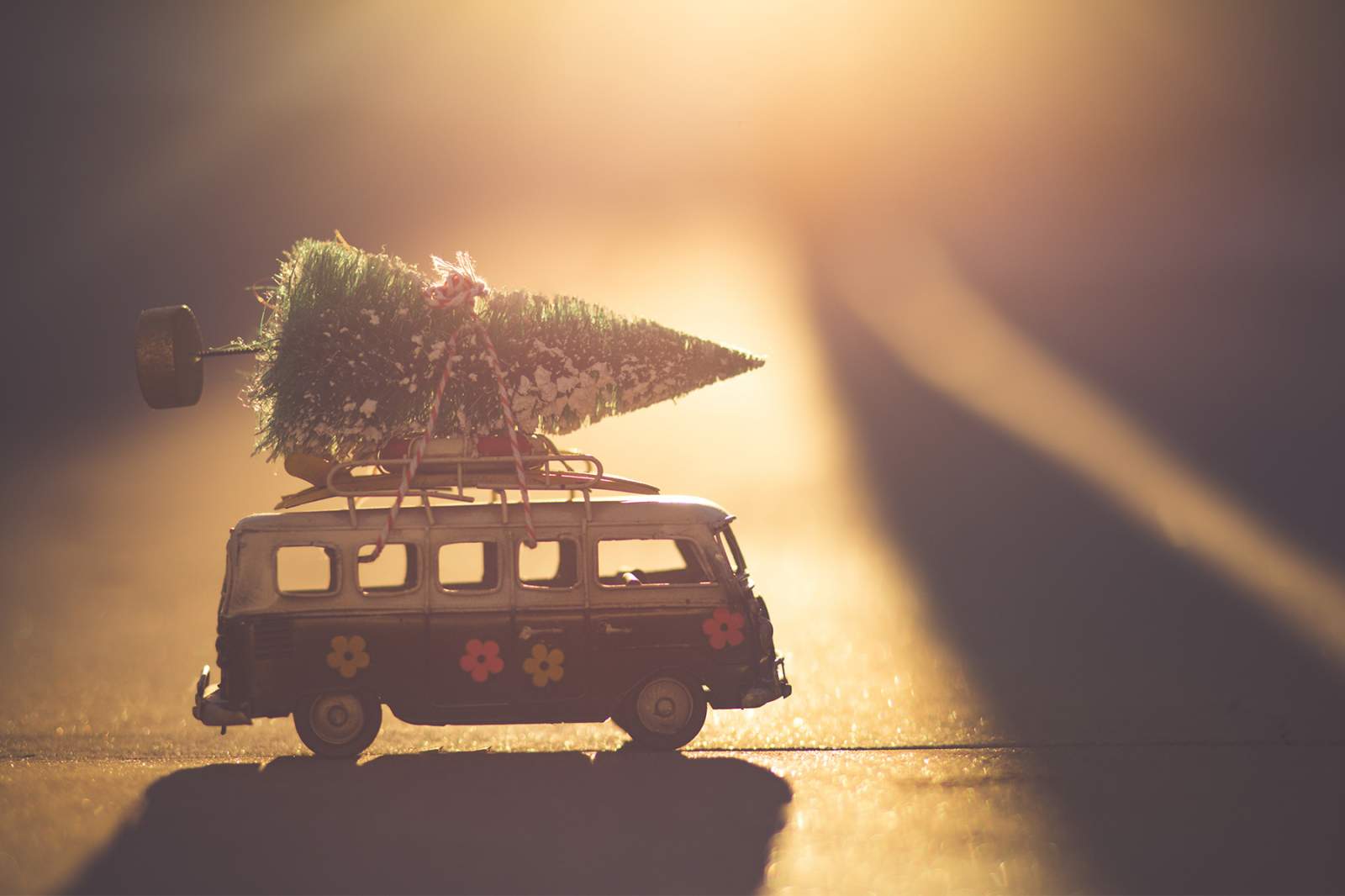 It was a holiday tradition that goes back as long as I could remember. The strong northwest wind was bitter, and even as a little seven-year-old boy, I knew the importance to keep moving to stay warm. Carrying a bow saw with one hand and pulling an empty sled with the other, my dad led the way breaking trail through the knee-deep snow. Following right in his footsteps was my older brother. I was trailing a bit behind in the distance.

We were heading to the back of our family farm property where there was this massive hill to choose a Christmas tree. Initially cleared by the early settlers during the workhorse and walk behind plow era, the hill was just too steep to operate farm machinery safely, so my dad left it to fallow. Seeded by the neighboring birds and squirrels, year by year nature was reclaiming it back to its original state. Both deciduous and coniferous trees were fighting for dominance.

After my dad stopped several times to allow my little legs to catch up, eventually we made it to that huge hill. There were so many big and beautiful trees to choose from, but in the end, it was my dad who made the final decision. It was not one of those big and beautiful trees which I would have chosen, but the tree he picked was rather small and forlorn looking. Coming from a patch of trees where they were very crowded my dad explained to my brother and I that by culling this one particular tree, it would give the other trees in the patch the chance to become big and beautiful.

I never heard of the term "forest management" until many years later, but my dad taught it to me at the tender age of seven in an efficient way. After checking to make sure the tree he chose was free of nests that a migrating bird would have constructed and possibly return to in the spring, my dad got down on his knees in the snow and cut the tree down. As my brother and I lifted the tree onto the sled, I came to appreciate this small forlorn looking tree. Sacrificing itself, it was giving the other trees in that crowded area a better chance of growing up to be big and beautiful. It gave me a broad sense of awe and appreciation once that tree was displayed in our living room.

My childhood years rolled by and our wonderful family Christmas tree tradition continued. Coming into my teenage years, I got the responsibility of choosing which Christmas tree. It may not have been the biggest or most beautiful aesthetically; it often would be a sad, forlorn-looking tree whose sacrifice would benefit this newly established forest.

Way back in 1374, a guy by the name of Geoffrey Chaucer supposedly coined the simple phrase "All good things must come to an end." Well, in 1973 that expression could not have been more accurate. It was mid-November 1973, just a couple of weeks shy of our annual Christmas tree pilgrimage. While out plowing a field on the farm my dad suffered a massive heart attack and died instantly. He was 47. My entire world turned upside down and I dreaded the thought of a Christmas without my dad. In my deep grieving, I knew that going to that back hill would no longer be the same.

While I tried to push Christmas as far out of my mind as I could, my mom was in a desperate attempt to salvage some normalcy for that first Christmas without her husband of 21 years, and normality for us kids. A couple of days before Christmas she went out shopping with a neighbor friend and came back with this huge box. It was an artificial Christmas tree. People purchase artificial trees for various reasons, for mom it was a way of making us all a fresh start after my dad's death.

I did not know what to make of it, but felt it was well named; artificial and fake, it felt so awkward assembling this tree of plastic. But mom was happy and that was the most important thing. The farm was sold and along with the tree, my mom moved to another house. Mom lived her childhood during the Great Depression. She knew what it was like to have nothing, and lived by the adage "If it still works don't throw it out." She kept that tree and put it up each Christmas for the next 30 years.

The Christmas tree that we take home from the store looks like a real tree, but it is fake. It is made up of chemicals. So much so that some places such as the State of California are required by law to have a warning label about the chemical content of artificial Christmas trees before they reach the retail floors. The central plastic component of a fake Christmas tree over the past few decades has been cut from compressed sheets of PVC; which stands for Polyvinyl Chloride. PVC is a known human carcinogen. To make the Christmas tree branches soft and flexible, a considerable class of chemicals called phthalates are used. These are tied to a wide range of health issues. Lead is a big concern in artificial Christmas trees because it is often used as a stabilizer in PVC plastic. Scientists are increasingly convinced there are no "safe" levels of lead, especially for young children. The report mentions "when an artificial Christmas tree reaches nine years old, dangerous lead exposure can occur." After my mother died from early-stage dementia, I wondered if there was an environmental reason as to why she caught the disease as she was a very healthy woman.

According to the Mayo Clinic, "Exposure to heavy metals such as lead can contribute to dementia.” I dismissed this article until I found out where lead might be unsuspectedly found and I instantly thoughts of her fake tree that she kept for30 years; she held it 21 years longer than recommended.

The US Commerce Department reports that 85% of the world's artificial Christmas trees originate in China. In a 2014 BBC article, it mentions that 60% of all the world's Christmas decorations (trees and ornaments) are manufactured in only one Chinese city called Yiwu for our enormous world Christmas decoration market. Without any of the labor standards we have in North America, workers are paid somewhere between $200 and $300 a month to work 12-hour-plus shifts six days a week. Workers are exposed to chemicals in the manufacturing process. Once produced, the tree is boxed and trucked to a nearby port where it is shipped to points around the globe. For myself, the nearest major city is Toronto, Canada; a distance of 11,659 kilometers "as the crow flies."

Now that I have my own family I am making sure that good things don't always have to come to an end. Our family tradition is buying a real Christmas tree purchased from the local firefighters at the firehall a few hundred meters up our street. Instead of trees that travel in boxes well over 11,000 kilometers, the firemen source their trees locally from a Christmas tree farm just 25 kilometers north. Initially cleared by the early settlers, the soil is quite sandy there, and not quite as suitable for conventional crops. The land was eventually put back to use as a Christmas tree farm. While they are growing, these trees will absorb carbon dioxide and other gasses and emit fresh oxygen, these Christmas trees stabilize the sandy soil, protect water supplies and support complex eco-systems. In the spring, new seedlings are planted to replace any trees that were harvested and of course, real Christmas trees are entirely biodegradable. Our municipality picks up the trees in the New Year where they are then ground up for a natural mulch for the parks.

It is as not as simple to get a Christmas tree like it was when I was a child. There are choices to choose from and cost and convenience should only be part of the equation. Questions to ask yourself may be: Could there be any long-term health effects to you and your loved ones with the tree you choose? Can the tree be recycled? Is it biodegradable? What is the impact on the earth and environment?

Whether it is cost, convenience or even tradition, people choose their Christmas trees for various reasons. For our health and environmental health, making a conscious decision could not be more important these days.